29.11.202123:07 ফরেক্স বিশ্লেষণ এবং পর্যালোচনা: How to trade GBP/USD on November 30? Simple tips for beginners. As expected, the pound was unable to continue its growth

30M chart of the GBP/USD pair 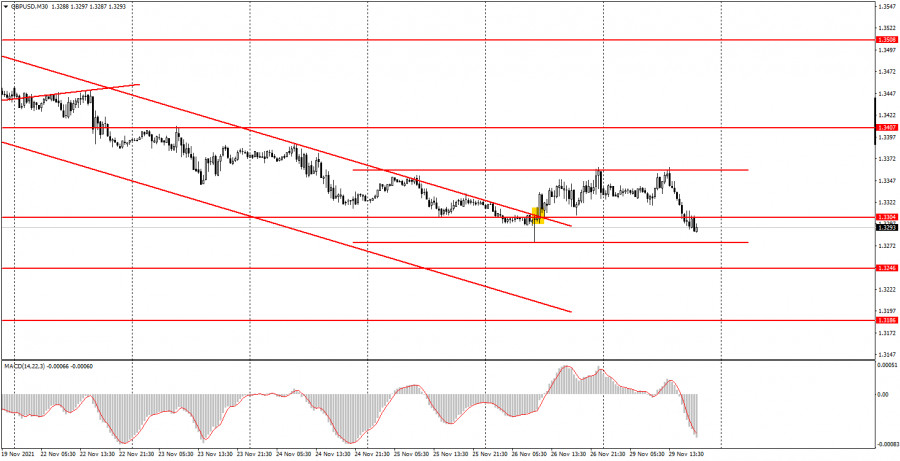 The GBP/USD pair reversed its trend to an upward trend on Friday, but rejected it very quickly. In other words, the bulls were unable to continue moving up on Monday and pulled back from Friday's highs by almost 100%. As a result, a horizontal channel has already been formed, overcoming the lower border of which may mean the resumption of the downward trend. We believe that this is the most logical option now. You should also closely monitor the possible price rebound from the lower border of the channel. It can provoke an upward movement to the upper border, that is, at 80 points low. As for the macroeconomic and fundamental background on Monday, novice traders had absolutely nothing to pay attention to.

5M chart of the GBP/USD pair 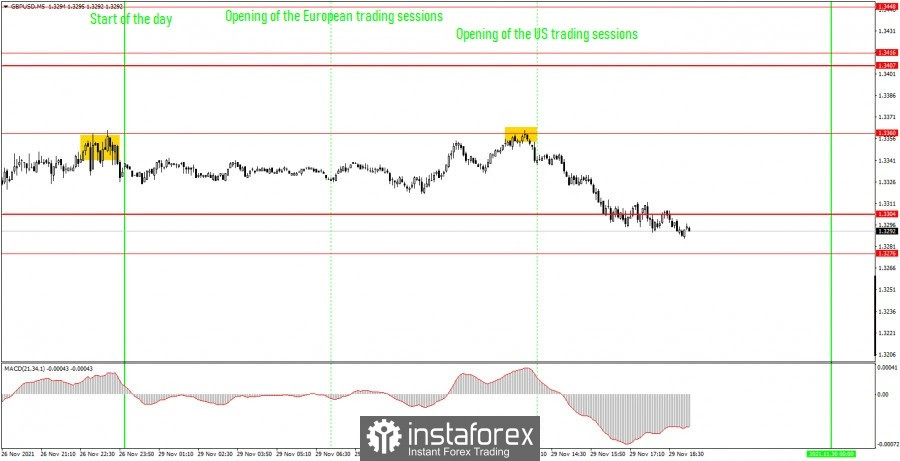 On the 5-minute timeframe, the movement of the pound/dollar pair looks pretty good on Monday. Especially in the afternoon. However, only one trading signal was formed - near the level of 1.3360, which is a corrected level (earlier it was located slightly lower, at 1.3352), but the value of 1.3360 is Friday's high. However, this does not play a special role in determining the only sell signal on Monday, since even if it formed a little lower, it would still mean opening one short position. So there isn't much of a difference. So, the rebound from the 1.3360 level should have been worked out. The price subsequently dropped to the level of 1.3304, which at first even crossed, but was unable to continue falling further. Thus, it was near this level that the deal should have been closed manually in the late afternoon. In this case, the profit would be about 50 points. Also, the deal could be closed at any Take-Profit. Therefore, the profit would have been made anyway. A signal has also formed near the level of 1.3304, formally - a sell signal. But, since a short position was already opened at that time, it was certainly not worth opening the second one. A buy signal was not formed, as the pair could not confidently gain a foothold above the level of 1.3304.

How to trade on Tuesday:

At this time, on the 30-minute timeframe, the downward trend has reversed in just a couple of days, and a horizontal channel has formed. Thus, in the coming days, the pair may be in a flat, since the channel width is only 80 points, which is very small. Overcoming any of its boundaries can serve as a signal to open deals. In the same way as a rebound from any of the boundaries. The important levels on the 5-minute timeframe are 1.3276, 1.3304, 1.3360, 1.3407-1.3416. We recommend trading on them on Tuesday. The price can bounce off them or overcome them. There are no important levels below, as the price has not been at these price levels for over a year. As before, we set Take-Profit at a distance of 40-50 points. At the 5M TF, you can use all the nearest levels as targets, but then you need to take profit, taking into account the strength of the movement. When passing 20 points in the right direction, we recommend setting Stop Loss to breakeven. There will be nothing interesting in the UK again on November 30, and speeches by Jerome Powell and Janet Yellen will take place in the US, but it is far from a fact that the markets will react to these events.

Basic rules of the trading system:

1) The signal strength is calculated by the time it took to form the signal (bounce or overcome the level). The less time it took, the stronger the signal.

2) If two or more deals were opened near a certain level based on false signals (which did not trigger Take Profit or the nearest target level), then all subsequent signals from this level should be ignored.

3) In a flat, any pair can form a lot of false signals or not form them at all. But in any case, at the first signs of a flat, it is better to stop trading.

4) Trade deals are opened in the time period between the beginning of the European session and until the middle of the US one, when all deals must be closed manually.

5) On the 30-minute TF, using signals from the MACD indicator, you can trade only if there is good volatility and a trend, which is confirmed by a trend line or a trend channel.

6) If two levels are located too close to each other (from 5 to 15 points), then they should be considered as an area of support or resistance.

Support and Resistance Levels are the Levels that serve as targets when buying or selling the pair. You can place Take Profit near these levels.

Red lines are the channels or trend lines that display the current trend and show in which direction it is better to trade now.

The MACD indicator consists of a histogram and a signal line. When they cross, this is a signal to enter the market. It is recommended to use this indicator in combination with trend lines (channels and trend lines).

Important speeches and reports (always contained in the news calendar) can greatly influence the movement of a currency pair. Therefore, during their exit, it is recommended to trade as carefully as possible or exit the market in order to avoid a sharp price reversal against the previous movement.

Beginners on Forex should remember that not every single trade has to be profitable. The development of a clear strategy and money management are the key to success in trading over a long period of time.