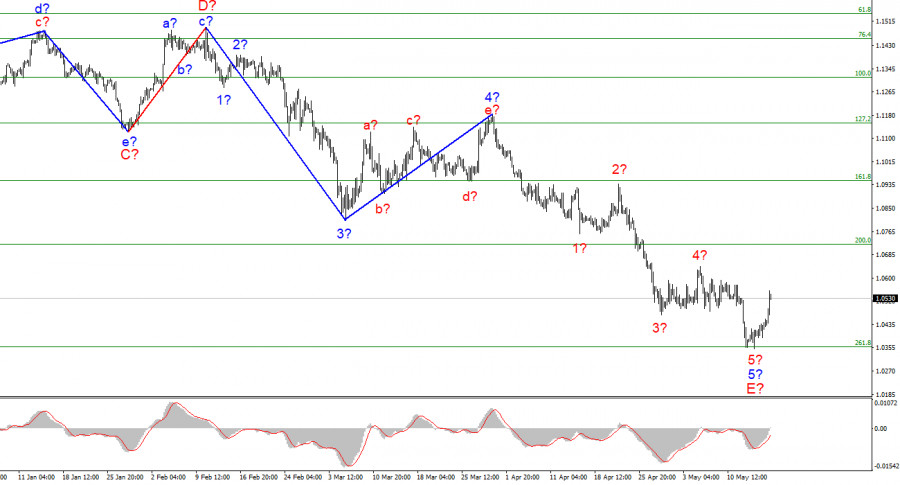 The wave marking of the 4-hour chart for the euro/dollar instrument continues to look convincing and does not require adjustments. The instrument has presumably completed the construction of the descending wave 5-E, which is the last in the structure of the descending trend section. If this is true, then at this time the construction of a new upward section of the trend has begun. It can turn out to be three-wave, or it can be pulsed. One way or another, the instrument has made a strong step towards completing a long downward section. The supposed wave 5-E turned out to be a pronounced five-wave, so its internal wave marking is beyond doubt. The only option in which the decline of the euro can resume is a strong complication of the entire downward section of the trend. It cannot be completely excluded, but I advise you to consider it as a spare. The coming days will be crucial for the instrument, as Tuesday's success will need to be developed. Without this, the instrument can very quickly return to decline.

Christine Lagarde's statements are dangerous for the euro currency now

The euro/dollar instrument rose by exactly 100 basis points on Tuesday. According to the current wave layout, this movement was expected. I talked about this in previous articles, since the downward section of the trend already looked quite complete. Thus, this increase could happen even on a day when there would be no news background. But today the news background was interesting. In the European Union, a report on GDP for the first quarter was released in the morning. The past value (+0.2% q/q) was adjusted to a value of +0.3%. This is positive news for the euro and the eurozone, so from the very morning, the market could increase demand for the euro currency. During the next time, the euro grew continuously, and the American reports came out just an hour ago when the euro currency had already grown by 100 points. I believe that they did not have an impact on the mood of the market today. However, two more events will take place today.

For the euro currency, it is now of great importance how the ECB and Christine Lagarde personally are set up. Recent statements by her and Deputy Chairman Luis de Guindos indicated that they have different opinions. Lagarde has never specifically stated that the interest rate will be raised at a certain time. But Luis de Guindos said a couple of weeks ago that it could be upgraded this summer. Now the market is waiting for a clearer position on monetary policy from Christine Lagarde. If her rhetoric becomes tougher and she confirms the ECB's specific intentions to tighten the DCP, and also names the deadlines, then the euro currency demand may continue to grow, since now two factors will support it. If not, then the euro can very quickly deflate and start a new decline. And the lower it falls, the greater the probability of complicating the downward trend section.

Based on the analysis, I conclude that the construction of wave 5-E is completed. If so, then it is already possible to buy a tool with targets located near the estimated mark of 1.0720, which equates to 200.0% Fibonacci. The downward section of the trend may still become more complicated, but it is already a backup option. 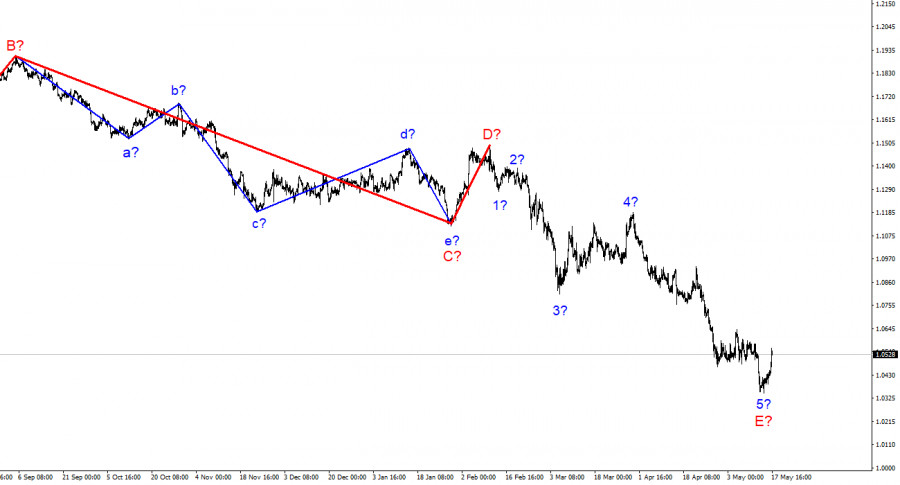 On a larger scale, it can be seen that the construction of the proposed wave E has been completed. Thus, the entire downtrend has acquired a complete look. If this is true, then in the future, the instrument will rise with goals, near the peak of wave D, that is, to the 15th figure.