30.11.202104:24 Forex Analysis & Reviews: Forecast and trading signals for GBP/USD for November 30. Detailed analysis of the movement of the pair and trade deals. The pound allowed traders to win back a failed Friday 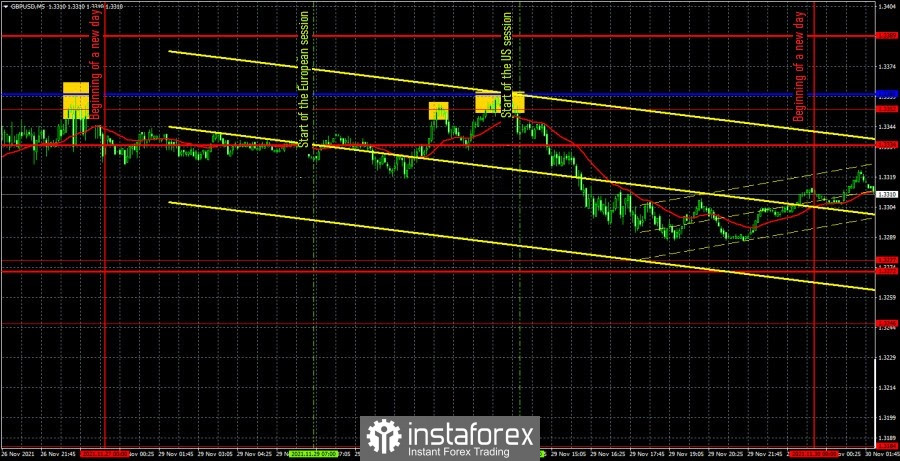 The GBP/USD pair did not move in the best way again on Monday. Nevertheless, several good trading signals have been generated. However, first things first. First of all, we note that the volatility of the day was about 70 points, which is not very much for the pound. However, there was not a single important macroeconomic event during the day on Monday. Only the speech of Federal Reserve Chairman Jerome Powell in the evening, when traders should have already left the market, having closed all transactions. Nevertheless, it turns out that on Monday the pound/dollar pair won back almost the entire Friday correction. Consequently, the downward trend may continue, but we will talk about this below. For now, let's analyze the two signals that traders had to work out. For the first time, the pair bounced off the extremum level of 1.3352, forming a sell signal. After its formation, the price went down only 12 points and returned to the level of 1.3352 and even exceeded it, having reached the critical line, which ran 8 points higher. That is why the level and the line should be considered in a pair, as an area of resistance. Therefore, the short position should not have been closed. And when the price bounced off the critical line, it was another sell signal, so it was necessary to stay in shorts. As a result, after this rebound, the price began to move to the downside and passed a total of about 50 points in the desired direction. Therefore, short positions should have been closed manually in the late afternoon at a profit of 50 points. 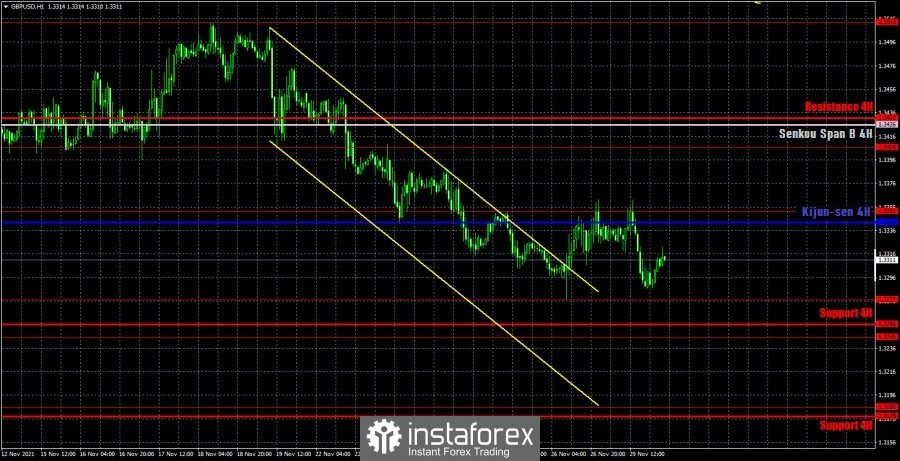 On the hourly timeframe, the pound/dollar pair broke out of the downward trend channel, but on Monday it did everything to resume its movement to the downside. Thus, as we said yesterday, leaving the channel does not mean anything now. The pound can still continue to fall. Especially if the level of panic in the world regarding the Omicron strain continues to grow. In this case, the demand for the dollar can grow as a reserve currency. It is also clearly seen in the charts of the hourly timeframe and the 4-hour timeframe that the pair bounced off the critical line several times. That is, the bulls did not cope with even the very first resistance on their way. As of November 30, we distinguish the following important levels: 1.3186, 1.3246, 1.3277, 1.3352, 1.3406. Senkou Span B (1.3426) and Kijun-sen (1.3343) lines can also be signal sources. Signals can be "rebounds" and "breakthrough" of these levels and lines. It is recommended to set the Stop Loss level at breakeven when the price passes 20 points in the right direction. The Ichimoku indicator lines can move during the day, which should be taken into account when looking for trading signals. There are no major events or publications scheduled in the UK on Tuesday. Therefore, traders will be able to pay attention only to the speech of Powell and US Treasury Secretary Janet Yellen. The consumer confidence indicator is unlikely to generate interest in the markets. There are much more important and interesting topics in the world now.

We recommend you to familiarize yourself:

Overview of the EUR/USD pair. November 30. The Omicron strain is advancing, but the foreign exchange market is still calm.

Forecast and trading signals for EUR/USD for November 30. Detailed analysis of the movement of the pair and trade deals. 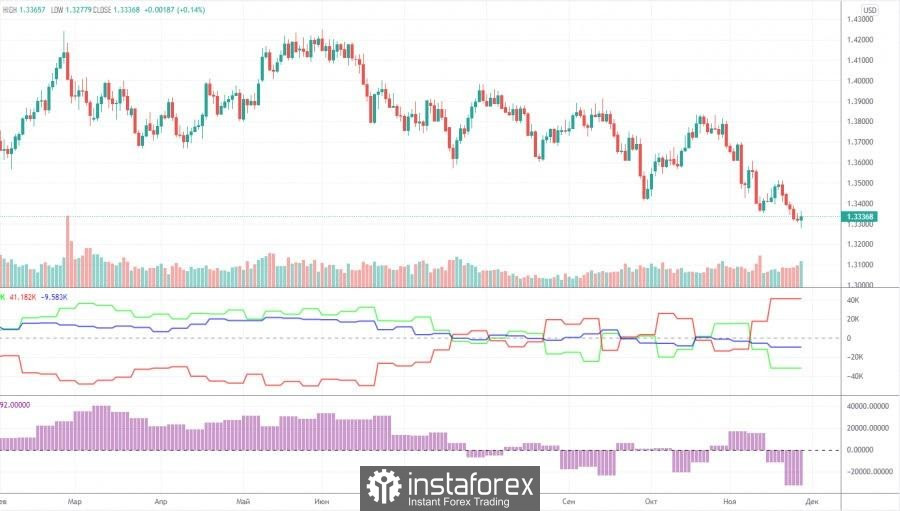 The mood of professional traders became much more bearish during the last reporting week (November 9-15). However, this should not be surprising, since the mood of major players has been constantly changing over the past few months, which is perfectly reflected in the first indicator in the chart above. The green and red lines, which indicate the net positions (in other words, the mood) of non-commercial and commercial traders, constantly change the direction of movement and constantly change their position relative to the zero level. The last reporting week only confirmed us in these conclusions. The green line has dropped significantly again, and the red line has increased significantly, although a couple of weeks ago it was the other way around. Thus, formally, the mood of professional traders has become more bearish, but in reality it changes every couple of weeks, so we can not make a long-term conclusion. The non-commercial group closed 4,000 buy contracts (longs) and opened 17,000 sell contracts (shorts) during the reporting week. Thus, the net position decreased by 21,000 contracts at once, which is a lot for the pound. However, this does not matter much, since the net position of non-commercial traders also constantly jumps up and down, which is eloquently signaled by the second indicator in the chart above. It should also be noted that in the long term, the pound/dollar exchange rate itself also constantly jumps up and down. Thus, it is not possible to make a long-term forecast based on COT reports.

Explanations for the chart:

Support and Resistance Levels are the levels that serve as targets when buying or selling the pair. You can place Take Profit near these levels.

Kijun-sen and Senkou Span B lines are lines of the Ichimoku indicator transferred to the hourly timeframe from the 4-hour one.

Support and resistance areas are areas from which the price has repeatedly rebounded off.

Yellow lines are trend lines, trend channels and any other technical patterns.

Indicator 1 on the COT charts is the size of the net position of each category of traders.

Indicator 2 on the COT charts is the size of the net position for the non-commercial group.