The shortage of goods in the United States in November rose sharply to the highest in the country's history, despite the fact that imports of consumer goods reached a record level ahead of the second consecutive COVID holiday shopping season. The decline also took place in the field of industrial goods, while exports declined after a historic profit a month earlier.

Record shortage of goods in the US worries economists

According to economists, the deficit in trade in goods, which was reported on Wednesday by the Ministry of Commerce, is likely to remain historically high as long as the coronavirus pandemic continues. The appearance of a rapidly spreading variant of COVID-19 from Omicron, which this week led to a record patient load in the United States and the world, may further aggravate the situation in the near future if it entails a reduction in spending by American consumers on services and a recovery in demand for imported goods. 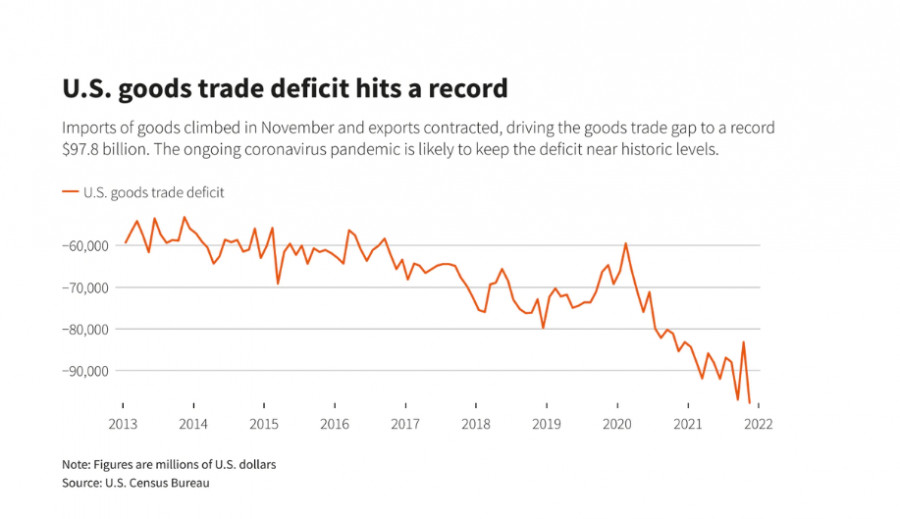 According to the Census Bureau, last month the trade deficit increased by 17.5% to $97.8 billion from $83.2 billion in October. That exceeds the previous record deficit, set in September at $97 billion, and may dampen optimism that trade can finally add to U.S. economic growth this quarter for the first time in more than a year.

Imports grew by 4.7%, primarily industrial supplies, increasing by $5.7 billion to $63.2 billion, followed by an increase in imports of consumer goods by $2.9 billion to almost $67 billion, as retailers rushed to fill store shelves in the run-up to Christmas. Both segments showed records.

"The appearance of the Omicron variant may further boost demand for imported goods if activity in the service sector is limited" in the first quarter of 2022, Nancy Vanden-Houten, a leading economist at Oxford Economics, wrote after the report on Wednesday.

Exports of goods, meanwhile, decreased by 2.1% against the background of a general decline, excluding an increase in food exports by 4.3%. The drop was caused by a reduction in industrial supplies by $1.4 billion and capital goods by $1.3 billion.

According to Vanden-Houten, the global surge in coronavirus cases to record numbers in recent days - including a record number of cases in the US - could affect global demand in the coming months, risking an even bigger trade gap.

The so-called Advance Indicators report also showed that wholesale inventories rose 1.2% last month, while retail inventories increased 2.0%. Retail inventories excluding cars, which are taken into account when calculating gross domestic product, increased by 1.3% to $465.2 billion, which is the latest in a series of record values.

The economy grew at an annualized rate of 2.3% in the third quarter, down from a year earlier, but activity rebounded in the fourth quarter, and economists agree that eventually the growth rate will be between 6% and 7% in the last three months of 2021.

Earlier this month, the Commerce Department reported a sharp reduction in the overall trade deficit, including services, for October, which gave rise to some optimism that trade could contribute to an increase in production in the last quarter of the year. A sharp reversal to a record deficit in goods trade in November may prompt a rethink of this issue.

Economists at Action Economics have lowered their estimate of fourth-quarter GDP growth to 6.5% from 7.0%, with exports now being subtracted from growth rather than added to it as previously expected. Meanwhile, economists at JPMorgan and Goldman Sachs did not change their estimates at 7%.

In addition, Omicron also carries the risk of deterioration in the housing market. Data on pending home sales released today showed an unexpected drop in November.

In November, contracts for the purchase of houses previously owned by the United States unexpectedly fell, as limited housing stock and high prices reduced activity, and an increase in the number of new cases of coronavirus poses a risk to the housing market, which will begin in 2022.

Although this data largely preceded the rise in popularity of Omicron in the United States, a very contagious new variant could further limit home sales in the near future, according to the National Association of Realtors.

Economists have predicted that contracts, which usually become final sales in a month or two, will grow by 0.5% in November.

"There were no planned home sales this time, which I would put down to the low supply of housing, but also to the fact that buyers were hesitant about housing prices," said Lawrence Yun, chief economist at NAR.

Looking ahead, Yun said that Omicron poses a danger to the housing market, as buyers and sellers remain on the sidelines, and the construction of houses is postponed.

In the short term, this will support traders' optimism, but economists are concerned about the threat of stagflation - a combination of rising prices and high demand. Of course, the demand is partly provoked by the pre-holiday fuss, and January will be much calmer. However, demand will still remain high, which may further spur prices and increase inflationary pressure.