The pound is so overbought that it's time to talk about the need for not just a rebound, but a full-fledged correction. However, instead, the British currency is essentially standing still. At the same time, during the European trading session, it even declined. Although the scale of the decline was much more modest than the day before. And there was at least some semblance of a rebound after the US session opened. As a result, the pound returned to the values at which it was at the beginning of trading. And all this happened against the background of a completely empty macroeconomic calendar.

It seems that European traders themselves do not see any prospects for the British currency. Unlike the American ones. Although to some extent, the pound's growth potential is held back by Europe itself. After all, the European Union is still making loud statements about its intention to abandon the supply of Russian energy carriers by the end of this year. At the same time, it is still not clear how to replace them. And the very nature of the statements hints at the desire to impose an embargo on Russian oil and gas. Which will lead to complete chaos in the energy market. Whereas Europe itself is extremely dependent on the import of these very energy carriers. So there is no doubt that Europe itself will suffer the most from this decision. And it is this issue that holds back the pound's growth potential. At the same time, it is also quite difficult to decline further, due to excessive oversold. Thus, we may well see continued stagnation today.

The GBPUSD currency pair, in the stage of a rollback from the variable reference point of 1.2155, returned to the area of the level of 1.2250, where a slowdown occurred. This step indicates the bears' desire to resume the decline.

The technical instrument RSI H4 is moving in the lower area of the 30/50 indicator, which indicates traders' interest in short positions.The moving MA lines on the Alligator H4 and D1 indicators have a downward direction despite the stagnation stage. There is no interlacing between the MA lines.

On the trading chart of the daily period, a gradual prolongation of the medium-term downward trend is observed.

Despite the slowdown, the pullback stage is still relevant in the market. In order for the downward cycle to resume, the quote must first return to the reference point at 1.2150. This price move will indicate an increase in the volume of short positions, which will lead to a breakdown of the variable support, as a result of prolonging the trend.

An alternative market development scenario considers the price transition from the rollback stage to a full-scale correction. This movement can be indicated by the price staying above 1.2250 in the daily period.

Complex indicator analysis has a variable signal in the short-term and intraday periods due to stagnation. Indicators in the medium term give a sell signal due to a downward trend. 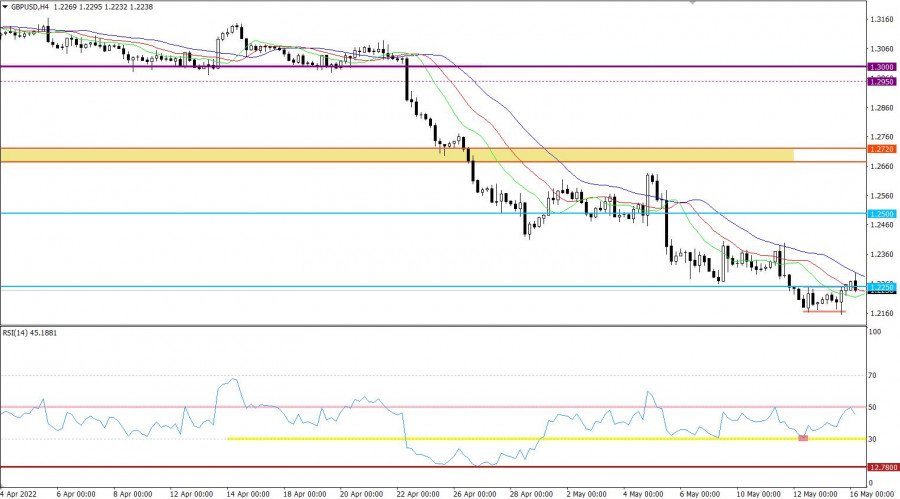