The first estimate of GDP growth in Europe in the first quarter will be published today, which predicts an acceleration from 4.6% to 5.0%. Considering what is happening in the world, this seems unlikely. And it is quite possible that investors will be disappointed by preliminary estimates, which will lead to a weakening of the European currency. In addition, additional pressure on the euro will come from data on inflation, the growth rate of which may well accelerate from 7.4% to 7.5%.

The EURUSD currency pair has reached an important support level at 1.0500, where the volume of short positions has decreased. This led to a slowdown in the downward cycle as a result of a technical pullback.

The technical instrument RSI H4 rebounded from critical oversold levels, eventually crossing the 30 line from the bottom up. This move indicates a regrouping of trading forces.

The moving MA lines on the Alligator H4 and D1 indicators ignore the rollback stage. The MA lines are directed downwards, which corresponds to a downward trend.

On the trading chart of the daily period, there is a downtrend in the active phase, which has overcome a number of important price levels. Based on the current situation in the world, dollar positions will continue to be considered the most attractive.

The technical pullback is only a temporary manifestation of the price, the downward mood persists in the market. In order for a new round of the downward cycle to emerge, the quote needs to be stable below the level of 1.0500. This will lead to an increase in the volume of short positions and movement towards the low of 1.0350. Until then, the market will continue to pull back, which serves as a regrouping of trading forces.

Comprehensive indicator analysis has a buy signal in the short term due to a rollback. Indicators in the intraday and medium-term periods give a sell signal due to the main trend. 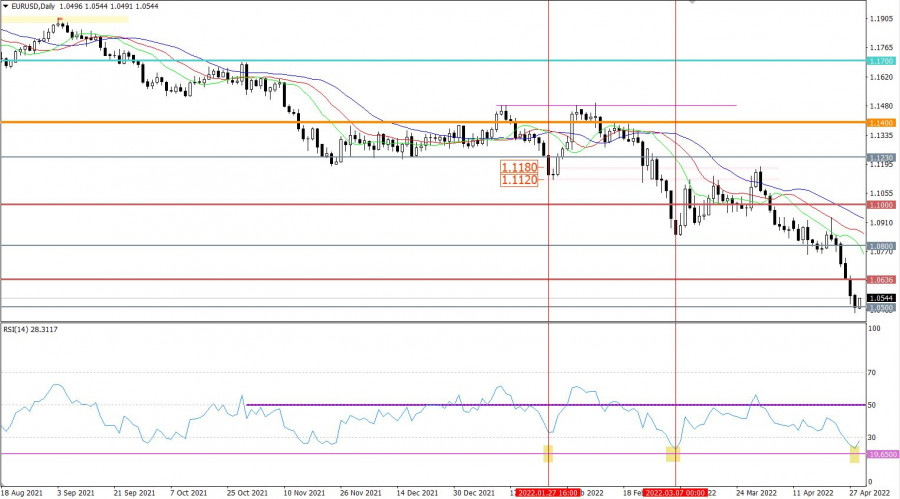