Analysis of transactions in the EUR / USD pair

A signal to buy emerged after EUR/USD hit 1.1360, but there was no sharp bullish movement even though the MACD line was above zero. Instead, the quote went down and gradually reached 1.1336, prompting a signal to sell the pair. By that time though, the indicator had already moved below zero, so the downside potential was limited. Its repeated test then led to a 20-pip growth as the MACD reached the oversold area. The third attempt, meanwhile, prompted another signal to sell, which resulted in a 30-pip decrease because the indicator was below zero. 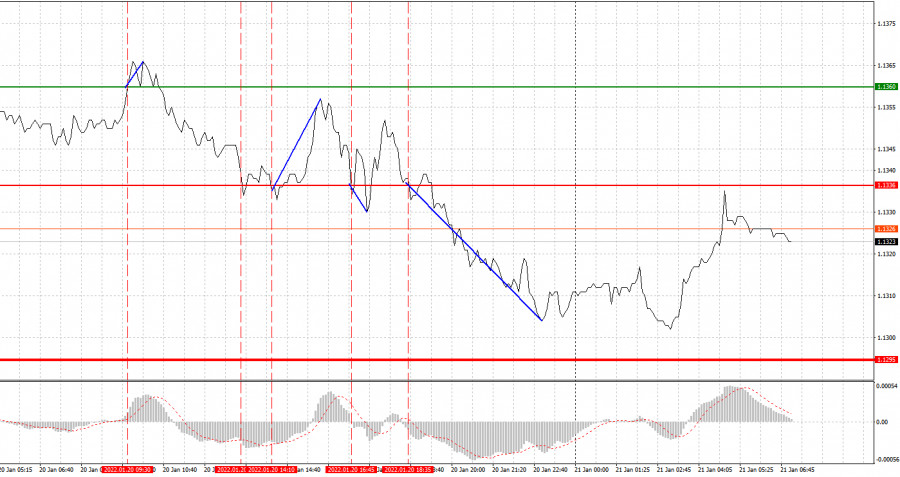 Euro rose early Thursday, thanks to the better-than-expected report on German PPI. However, demand for dollar returned in the afternoon amid stronger manufacturing activity in the Philadelphia Fed. The monetary policy meeting of the ECB was ignored by traders as the members did not say anything new during it.

There are no important UK data to be released today, so the highlight will be the upcoming statements of ECB chief Christine Lagarde. Euro will rally if she takes a more aggressive stance on monetary policy. Strong consumer confidence for January may also prompt increased demand for EUR/USD.

In the afternoon, the US will release data on leading indicators, but that is unlikely to have a significant impact on the market. More important is the speech of Treasury Secretary Janet Yellen as that is likely to focus on inflation, which is a serious threat to the economy.

Buy euro when the quote reaches 1.1342 (green line on the chart) and take profit at the price of 1.1377. The upcoming statements of ECB chief Christine LAgarde may prompt increases in EUR/USD.

Before buying, make sure that the MACD line is above zero, or is starting to rise from it. It is also possible to buy at 1.1318, but the MACD line should be in the oversold area, as only by that will the market reverse to 1.1342 and 1.1377.

Sell euro when the quote reaches 1.1318 (red line on the chart) and take profit at the price of 1.1286. Lack of bullish activity will lead to a decline in the pair.

Before selling, make sure that the MACD line is below zero, or is starting to move down from it. Euro could also be sold at 1.1342, however, the MACD line should be in the overbought area, as only by that will the market reverse to 1.1318 and 1.1286. 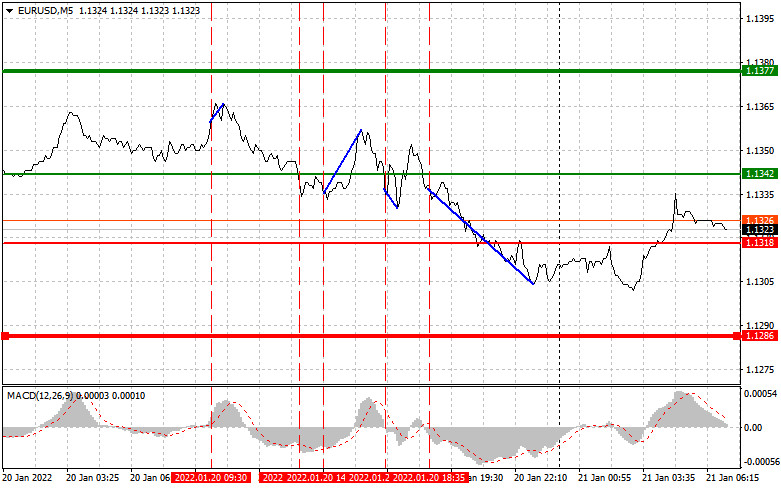 What's on the chart:

The thin green line is the key level at which you can place long positions in the EUR/USD pair.

The thick green line is the target price, since the quote is unlikely to move above this level.

The thin red line is the level at which you can place short positions in the EUR/USD pair.

The thick red line is the target price, since the quote is unlikely to move below this level.

MACD line - when entering the market, it is important to be guided by the overbought and oversold zones.

Important: Novice traders need to be very careful when making decisions about entering the market. Before the release of important reports, it is best to stay out of the market to avoid being caught in sharp fluctuations in the rate. If you decide to trade during the release of news, then always place stop orders to minimize losses. Without placing stop orders, you can very quickly lose your entire deposit, especially if you do not use money management and trade large volumes.

And remember that for successful trading, you need to have a clear trading plan. Spontaneous trading decisions based on the current market situation is an inherently losing strategy for an intraday trader.