29.11.202103:20 Forex Analysis & Reviews: GBP/USD. Preview of the new week. The pound will again try to resist the negative background from the UK. 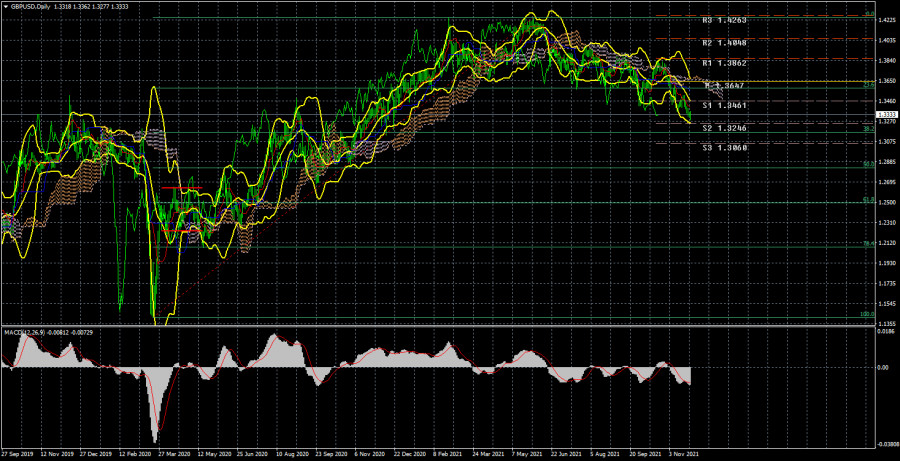 The pound/dollar pair continued its downward movement last week. To make it more clear what we are talking about, we have reduced the scale of the graph to a minimum. Now you can see how strong it was last year and how weak the overall downward movement is this year. Therefore, this movement is still interpreted as a correction. Consequently, the global upward trend may resume at any moment. The mistake here is that by doing reviews every day, you can fall into a "temporary trap". You assess the overall picture of the situation and conclude that a correction is taking place now. Accordingly, you are waiting for the upward trend to resume. But on a 24-hour timeframe, the correction may continue for another 5-10 months before the trend is resumed. Moreover, the very movement of the pound/dollar pair down in the last 7-8 months has internal upward corrections, which could easily and simply be confused with the resumption of the main trend. Thus, we are now waiting for at least a new round of upward movement of 400-500 points, since, as we said in the article on the euro currency, all the factors that provoked the strong growth of the dollar have long been worked out. The currency cannot grow forever on the factor of "possible tightening of the Fed's monetary policy" alone. Tomorrow, the "fourth wave" will overwhelm the States and all the plans of the Fed will collapse. Thus, the US currency has grown well in advance, but it is unlikely to be able to do this all the time.

But by sheer inertia, the markets can continue to sell the pair. As we have repeatedly said, any fundamental hypothesis requires confirmation by technical signals. If there are none, then you should not work out the hypothesis. It should be remembered that a market is always a huge number of participants, large and small players, and it is impossible to predict the mood of such a huge number of traders, funds, banks, and so on. Therefore, you should always follow the rule "trade according to the trend".

Let's now consider the next week and the news and reports that should be paid attention to. Of course, the most important event of the week will be the Nonfarm Payrolls report, which will be published on Friday. Last month, the labor market "resurrected" a little, which further increased the likelihood of the imminent completion of the QE program and tightening of monetary policy. What will happen this month is not yet clear, since the whole world is now facing a new "wave" of the pandemic, so supply chains, business, and economic activity may suffer again. According to experts' forecasts, 550 thousand new jobs were created outside the agricultural sector in November. However, forecasts for NonFarm Payrolls rarely come true. Probably, this time there will be either a strong excess of the forecast or vice versa. In addition, Jerome Powell will give a speech on Monday. But here everything will depend on what the head of the Fed will tell the markets. Other reports in the US will also be quite interesting, but will only slightly affect the local background within each day. Reports such as ADP, business activity indices in the production and services sectors of ISM can provoke a momentary, strong reaction of traders only if their actual value is very different from the forecast. And in any case, judging by the forecasts, no major changes are expected compared to previous values. Also, recall that ADP and Nonfarm Payrolls report rarely correlates with each other. A strong ADP does not mean that NonFarms will also be strong. On Friday, Markit's unemployment and business activity reports will also be released in America. Separately, it should be remembered that the funds in the Treasury will run out on December 15, according to Janet Yellen, which means that in the next few weeks Congress will again decide on raising the debt limit. We are waiting for new twists and turns between Republicans and Democrats.

What's in the UK? There is practically nothing in the UK. Andrew Bailey will deliver a speech on Wednesday and the index of business activity in the manufacturing sector will be published. On Friday, the index of business activity in the service sector. Thus, the markets will be much more closely monitoring the development of the situation on the "Northern Ireland Protocol" and the "fish issue", which have recently been quite acute for London. Recall that more than a hundred French fishing ships did not receive a license to fish in British waters and threatened to go on strike and even block the tunnel under the English Channel. As for the "Northern Ireland protocol", everything is the same here: London demands to revise the entire protocol, Brussels refuses such an "attractive" proposal. Negotiations, according to Maros Sefcovic, will be delayed for the next year. 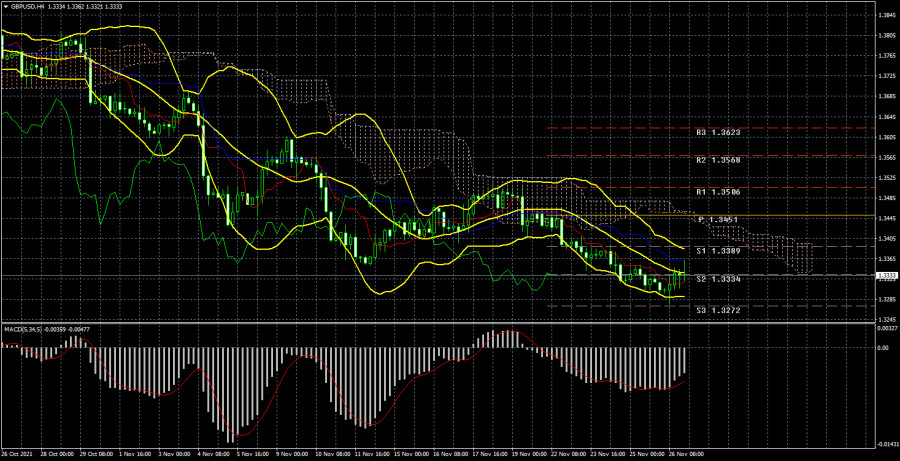 Recommendations for the GBP/USD pair:

The pound/dollar pair on the 4-hour timeframe on Friday also tried to start an upward correction, but could not even overcome the critical line. Thus, the probability of growth of the British currency is lower than that of the European one. Nevertheless, if this line is overcome, the pound may continue to grow with the goals of the Senkou Span B line and 1.3506. Since all the most important events next week are scheduled for Friday, during the remaining trading days, it will be possible to understand what mood the markets are in now and how well the two main pairs will correlate with each other.

Explanations to the illustrations:

Price levels of support and resistance (resistance /support), Fibonacci levels - target levels when opening purchases or sales. Take Profit levels can be placed near them.