To open long positions on GBP/USD, you need:

In my morning forecast, I paid attention to several levels, but due to excessively low volatility, we never managed to get to them. Let's look at the 5-minute chart and figure out what happened. Due to the lack of tests 1.3612 and 1.3656, no entry points were formed into the market, and apparently, a similar picture will remain for the second half of the day. The labor market data turned out to be much better than economists' forecasts, but this did not lead to active purchases of the pound, which suggests a further downward correction, which is fully implemented again in the afternoon. The technical picture and strategy for the second half have changed only very slightly. And what were the entry points for the euro this morning? 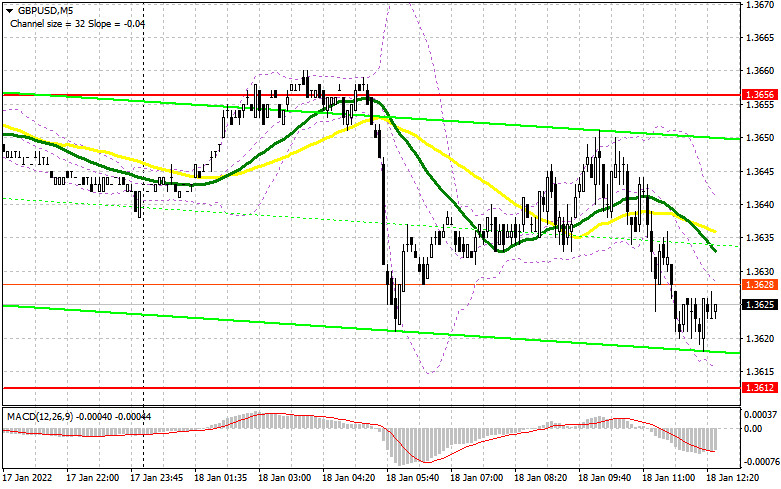 The main goal of the bulls for today, given that there are no important fundamental statistics for the United States today, remains the return to control of the resistance of 1.3649, where the moving averages are playing on the side of the sellers of the pound. At this level, buyers will be maximally targeted during the American session.

But before counting on active purchases, you need to think about protecting the nearest support at the base of the 36th figure. The formation of a false breakdown at this level forms a buy signal with the prospect of a return of the bull market aimed at growth above 1.3649. Only a breakdown and a test of this area from the top-down, together with weak indicators for the Empire Manufacturing manufacturing index and the NAHB housing market index, will give an additional entry point, which will strengthen the position of buyers to return to the level of 1.3687, the breakthrough of which will open a direct opportunity to update the monthly maximum of 1.3739, where I recommend fixing the profits.

In the scenario of further decline of GBP/USD during the US session and lack of activity at 1.3602, it is best to postpone purchases to the level of 1.3563, from where it will be possible to observe more aggressive actions of bulls – this is their last chance to keep the market under their control in the short term. To miss this area is tantamount to missing the initiative. Only the formation of a false breakdown at 1.3563 will give an entry point in the expectation of further recovery of GBP/USD. You can buy the pound immediately on a rebound from 1.3532, or even lower - from a minimum of 1.3496, counting on a correction of 20-25 points within the day.

To open short positions on GBP/USD, you need:

Bears are actively watching the sluggish attempts of bulls to offer at least something to the market and are preparing for another aggressive attack in the afternoon. Strong data on the manufacturing index and the housing market index in the US will increase pressure on the pair.

The primary task of the bears for today remains the protection of a rather important resistance of 1.3649, just above which the moving averages are playing on the side of sellers. Only the formation of a false breakdown at this level forms the first entry point into short positions against an uptrend, followed by a decline in the pair to the area of 1.3602. An equally important task will be to break through this range.

Taking control of 1.3602 will give a new additional entry point with the prospect of a decline in GBP/USD already to 1.3563 and 1.3532, where I recommend fixing the profits. If the pair grows during the American session and sellers are weak at 1.3649, it is best to postpone sales until the next major resistance at 1.3687. I also advise you to open short positions there only in case of a false breakdown. You can sell GBP/USD immediately for a rebound from 1.3739, or even higher - from a new high in the area of 1.3790, counting on the pair's rebound down by 20-25 points inside the day. 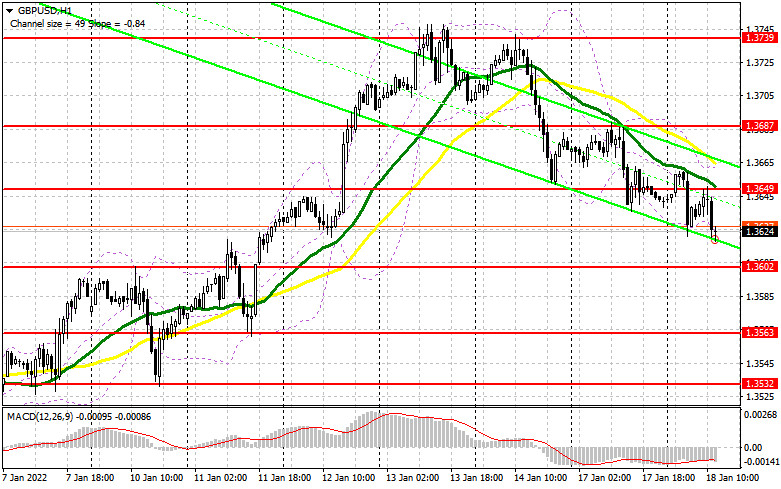 The COT reports (Commitment of Traders) for January 11 recorded an increase in long positions and a reduction in short positions - which indicates the continued attractiveness of the pound after the Bank of England raised interest rates at the end of last year. If you look at the overall picture, the prospects for the British pound look pretty good, and the observed downward correction makes it more attractive. The Bank of England's decisions continues to support buyers of risky assets in the expectation that the regulator will continue to raise interest rates this year, which will push the pound even higher. High inflation remains the main reason why the Bank of England will continue to tighten its monetary policy. Last week, Federal Reserve Chairman Jerome Powell said that he would not shape events and rush to raise interest rates, especially given the sharp decline in retail sales in December last year, which should cool inflationary pressure a little. This led to a decrease in demand for the US dollar, which will allow buyers of the pound to continue building an upward trend. The COT report for January 11 indicated that long non-commercial positions increased from the level of 25,980 to the level of 30,506, while short non-commercial positions decreased from the level of 65,151 to the level of 59,672. This led to a change in the negative non-commercial net position from -39,171 to -29,166. The weekly closing price rose from 1.3482 to 13579.

Trading is conducted below 30 and 50 daily moving averages, which indicates a downward correction of the pound in the short term.

Note: The period and prices of moving averages are considered by the author on the hourly chart H1 and differ from the general definition of the classic daily moving averages on the daily chart D1.